There are actually two words: Tantien and Hime.

Hime (Japanese: 姫): Prounounced like “he-mae” (both syllables are short)

Meaning princess. My father used to call me his little Indian princess when I was a child. Later on, he used it again and it stuck. Now, it’s a nickname. 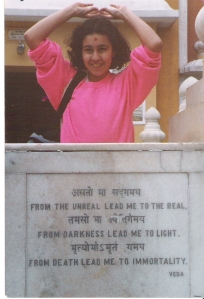 I always loved both cultures so it is a homage to them both, but different enough to make it unique.

My mother found this photo recently. It was taken in India when I was 12 years old. Though I’ve been using this title for a while now, it appears that I’ve been detined for “The Princess of the Eastern Soul”.

I’ve interpreted the name to be the the princess of the energy. I’m never the ruling one, which I’m okay with and always full of energy and light.

I wanted to leave this description for a topic of conversation, kind of a starter. But maybe this will start a few more. Enjoy.

6 comments on “What is “TantienHime”?”