As we approach the prom season, I feel that I must share yet another prom story. This one, I’ve told many times, but now, I want to share it with everyone.

I met “JM” in Grade 6 after I moved to Toronto from Burlington. He was in a different class but we all moved up to junior high together.

In Grade 8, one of my friends tells me that he has a crush on me. Now, understand two things:

He acted shy though I could smell a rat…or a trap…or a rat trap! We finally set up a date to go to the movies at the local movie house. Thank goodness I took my two friends with me as a back up because, as predicted, he stood me up.

A short time later, at Halloween, he and his buddies were outside of Lick’s, a busy spot in the Beach. As we walked away, they followed us squirting our asses with water guns. After we got across the street, I handed my candy bag to one of my friends, went back across the street and asked him to step aside with me so I could talk to him. Then I turned around and slapped him. I walked away before I could see him recover, but I didn’t hit him very hard. His friend chased after me and told me “You hurt my friend!” I replied (and my friends have never let me live it down) “Well, he hurt me emotionally!” We kept our distance after that…until Grade 9.

We ended up in the same math class and had to sit alphabetically by last name. I sat right behind him. I could have tortured him all year, but I took the higher ground and offered a truce. I figured we were stuck here for the rest of the year and had better make the best of it. He accepted and it lasted all the time in high school…until Prom.

I was setting up a shot of a couple of friends with my dad’s SLR camera. As I looked through the viewfinder, I saw someone jump into frame. I pulled to camera away from my face to see none other than JM standing in front of me and though I didn’t look down, I knew he was “all out”. I looked to my left to see my entire graduating class watching.

You know when you’re in a moment like this and you look back years later and wish you’d had the perfect line? This was not one of those moments. Almost instantly I said: “This is a telephoto lens, not a microscope. Put it away.” He turned red, put it away and everyone else laughed.

I still see him every now and then in my local pub. But everytime that happens, he leaves very soon after that.

I’ve recently read: “The best revenge is a vow to never be like the one who hurt you.” I believe that.

Last night I was told that the Retro Road Show for June is going to be Prom Night. I thought I would honour the day by reviving one of my old posts. Still relevant, but thought you all might enjoy.

I couldn’t find the whole article, but figured that I would at least pull this. I have it somewhere in actual print, and I’ll take another look some time. For now, this will have to do. I’ve heard that he’s been released, but luckily I haven’t found him. 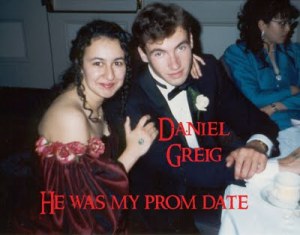 Toronto Star, October 4, 2003, Page A02: Daniel Greig had been warned to stay away from guns as one of the terms of his parole after a previous infraction. Even so, Greig acquired a six-shot, .44-calibre Smith & Wesson revolver, a .45-calibre Glock semi-automatic pistol, a .45-calibre Heckler & Koch semi-automatic pistol, a 12-gauge Franchi pump-action shotgun with a pistol grip and a collapsible stock and a M16, a .223-calibre Colt semi-automatic assault rifle. When Toronto police discovered his arsenal, the guns were fully loaded. Rounds were chambered and ready to be fired in the semi-automatic weapons and the shotgun. Justice Archie Campbell sent Mr. Greig away for what will amount to a total of 41/2 years.