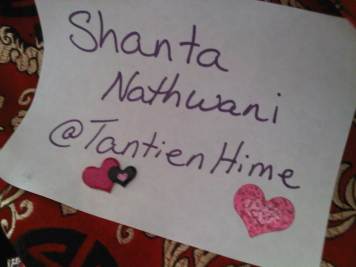 Name Badge with your Twitter handle is a great idea

Now, when I say networking, I’m not just talking about the “new” social media way of networking. I’m also talking about the face to face meetings. Gone are the days that everyone knows who you are only because you show up to every event. If you’re not online, you don’t exist. What I profess is a balance between the two. Life is about balance, your business should be too.

Many of the relationships that I have started, especially since moving to Hamilton, Ontario in January have been in person. When we made the decision in mid-November to make the move, I immediately hopped onto social media to see what was available here. I have friends out here, but few are in the realm I deal with in business. Two days after my family made the decision, I attended my first meetup: Hamilton Business Networking and Entrepreneurs Group.  I used the social media and technology aspect to find out the information and meet people in person. I wasn’t sure if the business model I’d been using in Toronto would work here, so I needed to meet people and talk to those that had been here longer than I.

One big difference between Toronto and Hamilton: both are willing to help, but Toronto people just don’t have the time or capacity to help all the time. The life is busy, never-ending, buzzing and tiring. By the time you come home and have dealt with your own stuff, you haven’t got the energy to help anyone else. In Hamilton, I’ve found that the capacity to assist others is immense. It could be a few emails on your behalf or sitting down for a coffee to discuss business or even pleasure. In Toronto, you might get to meet for coffee for 20-30 minutes. In Hamilton, it could be for an hour. That doesn’t mean that it takes longer, but the meetings are more meaningful and you have a chance to understand each other’s business, not just the current objective. I love Toronto, don’t get me wrong, but I’ve really found a second home in Hamilton and a big part of that is because of this meetup group.

I did a presentation to this group a couple of months ago (Social Media 101) and from that I have my entire customer base. More than 80% of them are members of this group, the other 20% have come from referrals in the group. I’ve had numerous discussions about whether the art of meeting people is dead or whether social media is not genuine, et cetera, and my belief is that they compliment each other. The conversation can start in person and then carry on over social media or vice versa. One of my teachers once said to me, “It doesn’t matter which path you take to reach the top of the mountain, so long as you get there,”. So if your goal is to increase your network and meet new people, why not increase the chances of that by getting on social media? Think of all the people you could reach with 140 characters on Twitter within a few seconds! About the same amount of time as a text message, less than an email and you can even attach a photo easily at the event you might be attending to show all your friends. Maybe they are interested in that even or what your involvement might be? The possibilities are endless.

Lastly, I want to add that social media should be done by YOU. Just like meeting people in person, if you hire someone to act as you, it’s not genuine. Why should I deal with someone who lies to me about who they are? I’m not talking about a large company that has someone do their social media as their job, but those individuals who have “ghost tweeters” and the like. If you want to get clients, be genuine, be honest and don’t be a ghost. Take ownership of your relationship.

If you want to see what I’m up to or where I’m going to be, check my events page here. Even if I can’t make an event, but I think it will be of interest, you’ll find it there. Hope to see you soon!

Here’s the presentation that I gave last night at Hamilton Business Networking  and Entrepreneurs Group’s Networking Mix & Mingle last evening. I got a lot of positive feedback on the presentation and had some great questions. I’ve edited the second to last slide from last night based on my discussions with some people after the presentation. Hope you enjoy it as much as I did delivering it. If you’d like the link to the video where I got the screen shots from, please see my post from yesterday. Happy Tweeting!